The largest daily circulation of 235,000 in Toyama Prefecture 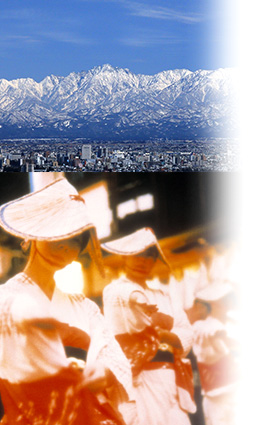 The Kitanippon Shimbun is the only newspaper which is headquartered, published and printed in Toyama Prefecture. Its daily circulation is over 235,000 and its newspaper market share in Toyama Prefecture is 60%. The Kitanippon Shimbun has been widely supported by the people of Toyama, and awards given to its articles provedthe Kitanippon Shimbun worthy of such readers’trust. Those awards includes the Japan Newspaper Publishers & Editors Association Award in 2007 for the scoop on the failure of high school students at a local senior high school to meet the required curriculum, and the Newspaper Advertising Award in 2008 for the advertisement series “Kyoiku no Ima to Korekara wo Kataru.” Not only fulfilling its responsibilities as a leading newspaper in the local journalism but also corresponding to the rapidly growing internet society, we have been expanding our service as integrated information media. In 2010, we launched a web newspaper “webun,”seeking the future of journalism in the Internet Age as well as providing enjoyment and easy reading by utilizing various functions unique to the website.

The Kitanippon Shimbun opens the future with its readers

The Kitanippon Shimbun is also working on local revitalization. For the creation of new values of our hometown, we have promoted locally produced food ingredients, and held campaigns for the rediscovery of attractions in Toyama. At the same time, we have been considering the desirable future direction of this region by running features on the pressing issues such as medical care and an aging society. For the promotion of local sports, we have also supported and covered the teams based in Toyama－the football team KATALLER TOYAMA, which joined the J-League in 2009,and the baseball team TOYAMA Thunderbirds (BC League).

In today’s advanced information society where media has become more and more diversified, the role of newspaper has become bigger and bigger.We must sharpen our spirit of journalism in order to relate to our readers more and gain further trust from the local communities. We will move forward, reflecting on the fundamental standpoint of newspapers and what newspapers can do for Toyama and better people’s lives. 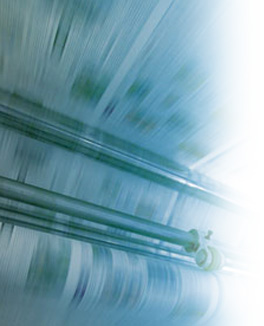 The online edition of the Kitanippon Shimbun, “webun” consists of three sites － news, sports, and life information. It presents breaking news in a timely manner after a print edition is published, and its search feature is excellent. It is full of original contents, such as news videos, photos unpublished in the print edition, restaurant information and a cooking recipe search. You can use the “My scrap function” which enables you to access a printed image and save articles.

In commemoration of its 120th anniversary, the KitanipponShimbun created communication logo. The logo design was based on theimage of the letter K which is the initial letter of the company name. Red means inspirations and passion, blue means the sky and sea, and green means the fertile landof Toyama Prefecture. This is the symbol of the Kintanippon Shimbun which sends warm heartsas well as detailed information.